How to Fix a door

The most common problems are also the easiest to solve

Fix a latch that won’t catch

If a door won’t latch—even with a hard push—it’s probably because the latch is hitting the strike plate too high or too low, so it can’t enter the strike plate’s opening. First, tighten all the hinge screws in both the door and the jamb. If that doesn’t solve the problem, take the steps below.

1. Do the lipstick test

Remove the plate and extend the opening with a metal file. A half-round “bastard” file is perfect for this job.

With the door closed, gently hammer a nail up into the hinge knuckles. When you’ve driven the pin as far up as you can, grab it with pliers and yank it out.

Petroleum jelly is a good lubricant for this job, because it stays in place without running. Reinsert the pin and you’re done.

When a door rubs against the jamb along the latch side, it’s often due to loose hinge screws, so tighten them first. If that doesn’t work, watch the edge of the door as you close it to determine if it’s contacting the jamb near the top, bottom or middle. Then try the fixes below. 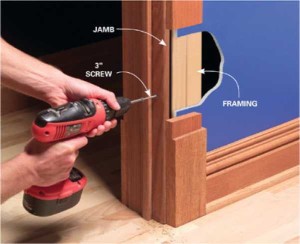 Choose the hinge opposite where the door rubs against the latch side of the jamb. Remove one of the hinge screws and drive in a 3-in. screw. That will pull the door slightly away from the rubbing point. 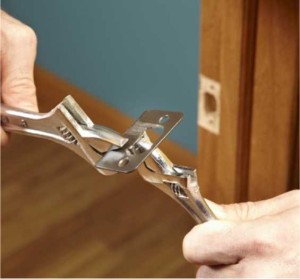 At the rubbing point, drive a 3-in. screw through the jamb and into the framing behind it. This will draw the jamb slightly away from the door. It will also leave you with an ugly screw head to putty and stain, so do this only as a last resort.

A door that rattles isn’t closing firmly against the door stop molding. The simplest solution is to stick a cabinet bumper to the stop molding. Another fix is almost as easy: Remove the strike plate and bend the tab slightly. This may take some trial and error before you get it right.

If a door drifts open or closed, you probably have a ghost. But a little extra friction in the hinge might help. Remove the upper hinge, lay it across two blocks and bend it slightly with a hammer. If that doesn’t solve the problem, do the same to the bottom hinge.