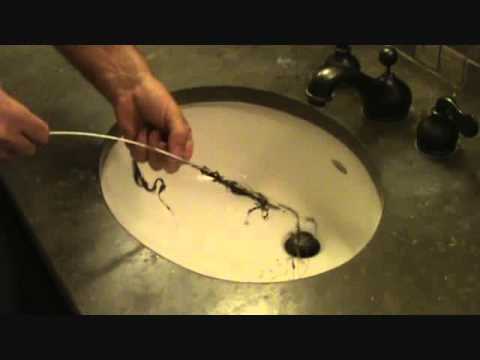 How Can I Unclog My Sink

In most cases, you can do exactly what a pro would do

If you have a sink that drains slowly—or not at all—don’t call a plumber just yet. There’s a good chance that he will take the very same approaches shown here. So at least try the first two methods. Then, if you’re willing to disassemble the drain lines, try the third. These strategies also apply to bathroom sinks, tubs and showers. If the clog is especially tough or deep in the lines, you’ll have to call in a pro with more know-how and equipment. 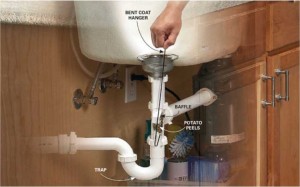 If you have a two-bowl sink, look underneath to determine which bowl is above the trap. There’s a baffle just above the trap that’s meant to direct water down the drain. But that baffle is also a notorious clog-causer, especially along with a heavily used garbage disposer. Bend a coat hanger or other stiff wire and slip it down the drain. When you feel the wire hook onto the baffle, wiggle and jiggle to dislodge the clog.

Follow two rules to avoid kitchen clogs: First, don’t use your garbage disposer as a trash can. Instead, use your disposer to handle just the tidbits rinsed off plates or a few peels dropped in the sink. Sending plate loads of food or heaps of potato peels down the drain is asking for trouble. Second, never pour grease down the drain. And running hot water doesn’t help. The grease will just congeal farther down the drain where it will be even harder to clear.

Inexpensive, effective and easy to use, a drain snake is the primary clog-buster used by most plumbers. And you can own one for less than $20. The drum contains a coil of springy cable with a spiral hook at the end. Just turn the crank and the cable spins as you feed it through pipes. Usually, the hook is too large to fit through small openings like kitchen sink baskets. But you can clip off the hook and bend the cable’s end to make a smaller hook. Sometimes it also helps to bend the end.

If the coat hanger didn’t do the trick, send a snake down the drain. Loosen the setscrew to unlock the cable and feed the cable into the drain until it won’t go any deeper. With about 8 in. of cable sticking out of the drain, tighten the setscrew, withdraw the cable about 1 in. and start spinning the drum. As you spin and push, the cable should wind its way through the trap. If it gets stuck, back off a few inches and try again. Don’t keep spinning while the cable is stuck; that will cause the cable to twist and bend inside the pipe. Spinning fast while applying light pressure is often the best way to get past tough spots. It may take several tries to work the cable through the trap. The cable will either break up the clog or hook it so you can pull it out.

If the clog is far past the trap, you probably won’t be able to feed the cable through all of the turns in the pipes, so the next step is to remove the drain lines under the sink. If you have plastic lines, they’ll likely come apart and slip back together without too much trouble. Metal lines, especially old ones, are more stubborn; plumbers often replace them to avoid reassembly hassles. In either case, you disconnect the joints by loosening the nuts with large pliers. Be sure to have a bucket and rags handy to deal with the trapped water. With the lines disassembled, look into the trap and up into the sink drain. If they’re clear, you know the clog is farther down the line. Send the snake as far as you can into the drainpipe, then reassemble the lines. Until you run water down the drain, you won’t know if you cleared the clog.