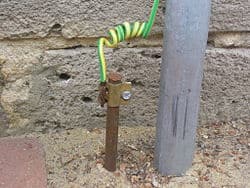 Faulty switches, outlets and motors can leak electrical current without affecting the fuse or circuit breaker. Since power continues to surge through the wires, the leak needs an outlet. Pulled by the earth’s magnetic force, this leaking current will search for the quickest route to the earth. If you happen to be touching the faulty switch as the current is leaking, you become the route to the earth and serious injury can result.

This is why all codes require equipment needing a powerful current to be grounded, so that any leaking current will find a safe route to the earth.

The service panel in your home is grounded by a wire connecting the panel to a rod in the earth. Frequently, the ground wire is attached to a water supply pipe leading into the ground. If your wiring system is grounded, then all metal outlets, switches and cables are connected to the grounding terminals in the fuse box. The use of a three-prong cord on an appliance continues the grounding right into the appliance.

To check to see if your system is grounded, look at the wiring in your house. Non-metallic cable wiring should have an unsheathed third wire connected to electrical outlet boxes. The use of BX cable means your system is grounded, since the metallic sheathing on this type of cable acts as a grounding conductor, as does any metal conduit that holds your wiring system. Three-prong electrical outlets should also be installed in the house, to carry the grounding into the appliances. Never use a grounded three-prong plug in an outlet that doesn’t allow for the grounding prong. Never remove the third prong from the appliance plug

In household wiring systems, the wires are coded for safety. In a 120-volt system, the neutral wire is white, the hot wire is a color other than white. Both wires are live. In a 240-volt system two different-colored wires are used out neither should be white. The ground wire in your system should be bare.

HOW THE INTERRUPTER WORKS

As power passes through the interrupter and transformer, the current running through both wiresmust be equal. If the hot wire current is greater, the sensor trips the interrupter.