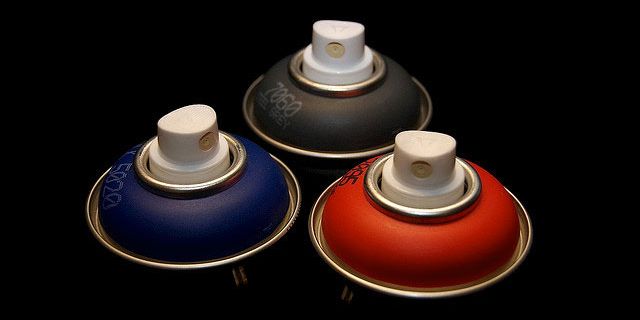 And apply flawless wood finishes, too

Do it right, and a sprayed-on coat of paint is absolutely flawless. Do it wrong, and you’ve got a sloppy, spattered mess. The same goes for clear wood finishes like lacquer or spray-can polyurethane. Whether you’re painting or clear-coating, here are some tips to avoid trouble and achieve perfection.

If you overlap just a little, you’ll get narrow bands of heavy coverage. Instead, overlap the spray about halfway over the previous pass. That way, the entire surface will get the same coverage.

Start before and stop after

Spray nozzles tend to spit out a few large droplets when you start spraying and spit again when you stop. To keep sputter splatter off your project, pull the trigger before you’re over the target and release the trigger after you’re past the edge.

If you’ve sprayed a project that required a few cans of paint, you already know about finger strain and pain. For less than five bucks, a trigger handle not only prevents the pain, but also gives you better control of the can.

It’s the most natural motion for your arm, but it gives you heavy buildup at the center of the surface and poor coverage at the ends. So instead, move the can parallel to the surface. Concentrate on straight, steady motion for even coverage.

Spray cans fill the air with a fine mist and solvents. Open windows and doors to provide ventilation and wear an organic vapor respirator to protect your lungs. Working outside is the most effective way to avoid breathing fumes, but wind can blow away your paint before it reaches the surface, while bugs and falling leaves wreck your finish.

You’ve probably heard this many times before, but it’s true: Several light coats are better than one heavy coat, especially on a vertical surface where heavy coats mean runs. Nobody has ever regretted going too light, but every experienced spray painter knows the agony of drips and sags.

Take a tip from pro finishers and contain messy “overspray” with a spray booth. Yours can be a simple cardboard box. Cut a hole in the top to let in light. The hole also lets you suspend items from a coat hanger and spin the item so you can hit all sides.

If your project is sitting directly on a workbench or newspaper, it’s impossible to paint it without also gluing it to the work surface. So whether you’re spraying paint or brushing, find some way to raise the work. Screws driven into furniture legs work great. Scraps of plywood with protruding screws also solve the problem.

When you’re done painting, hold the can upside down and spray for a few seconds until only propellant comes out. That almost always works to blast paint out of the nozzle, leaving it clear and open for the next job. If it doesn’t, or if you forget, there’s a fix: Soak the nozzle in nail polish remover. It may take a few hours to unclog the nozzle.

On some projects, you’ll walk miles circling the item to spray all the surfaces. So pick up a lazy Susan turntable at a discount store and save some legwork.