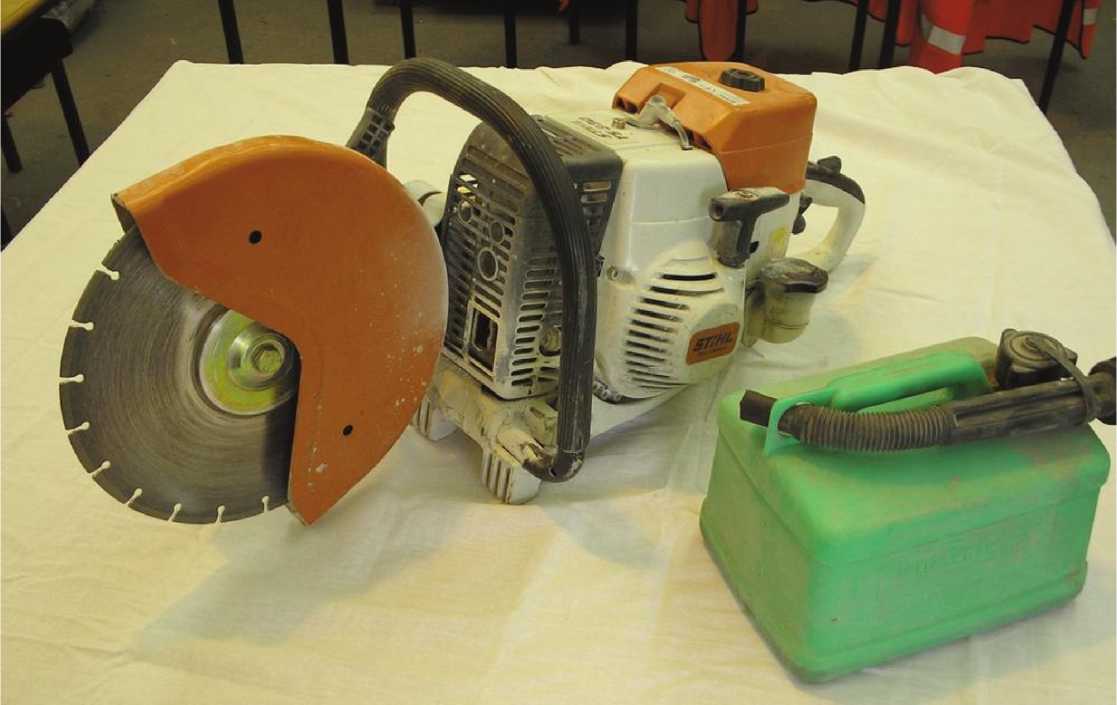 The tools in a roofer, slater and tiler’s bag or tool box will vary from firm to firm and from region to region, and so will the terminology describing them. The tools below are most common roofing tools. from my own tools and those which are most commonly used throughout the industry. Much, of course, depends on the type of work you are doing, so I have included a brief description of what each tool is used for to help you decide what you may or may not need.

Retractable tapes come in all sorts of quality and length, but for measuring roofs and for general use go for a heavy-duty, retractable tape in excess of 7m long.

Many roofers (including me) prefer to use a folding rule rather than a tape in certain situations. Go for a 1m folding rule that shows metric and, if possible, imperial measurements as well. 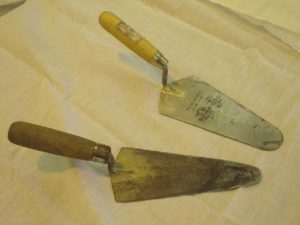 The trowel most commonly used by roofers is the gauging trowel (about 175mm in length). It is big enough to bed mortar with and small enough to point with. Go for a forged trowel, which means that the blade and the handle are all of one piece of metal; the cheaper ones are welded together and not really robust enough for roofing work. 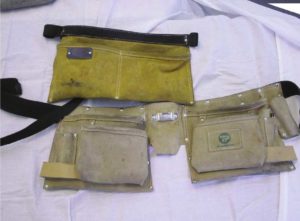 There is a wide variety of nail pouches available, some are more tool belts than pouches and, while the odd extra pocket or loop is handy at times, a simple nail pouch with two separate compartments should be fine in most situations. This will allow you to separate batten nails and clout nails for ‘lathing and felting’ and then tile and slate nails and clips (if applicable) when fixing the roof covering.

Lines are useful for striking lines when battening and setting out for tiling, for example. If you are using a wet line choose one that is quite stiff, absorbent (that is, not nylon) and well made. The sign of a good line is that it does not separate when twisted backwards and forwards in the fingers. The colouring used is normally red cement dye mixed with water. If you prefer a chalk line then buy a heavy duty one and fill it with a coloured chalk.

This is still commonly referred to in the trade as a ‘Stanley knife’, although that is strictly a trade name. They are used mainly for cutting underlay. Straight blades will cut most types of felt and underlay, but if you are using bituminous felt I would recommend hook blades.

By all means have a manual drill and a few straight and cross-bladed screwdrivers in your tool bag as a backup and for small jobs, but, if you are going to be doing a lot of dry fix or installing roof windows, then a cordless drill (the higher the voltage the better) plus a selection of masonry bits and screwdriver bits are essential. 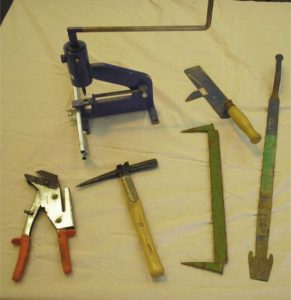 A break iron is basically an anvil for cutting natural slates in conjunction with a slate knife. These are the traditional tools used to cut slates and are still widely used, despite the introduction of hand-held cutters, especially when it comes to the heavier, thicker slates.

Now many natural slates come pre-holed, but you do pay a premium for that service and there are some occasions when it is preferable to hole the slates yourself. Slate-holing machines can have a punch- or borer-type action and come with adjustable guards to set the holing position. Traditionally, a slater’s apprentice or labourer would set up a bench with a break iron, slate knife and holing machine and it would be his job to grade (into three or more thicknesses) and hole all the slates and cut the fittings (half slates, under-eaves, topper slates and so on) for the craftsman.

Which hammer to use for lathing and felting is a matter of personal preference. At one time, nearly all roofers used a lath hammer (the modern ones are actually plastering drywall hammers) because you were allowed to chop the battens rather than saw them, as happens now. For most roofers, it seems that a decent claw hammer is now the weapon of choice.

This is the traditional slater’s hammer, with the pick being used for making holes in situ and the small head providing the accuracy needed to nail slates without breaking them. 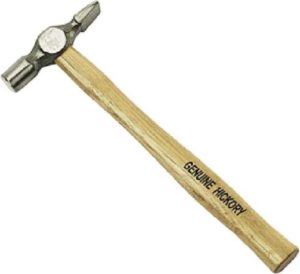 I have always carried one of these in my tool box since I was an apprentice because it is very handy for chipping away bits of tile, taking nibs off and for picking up and nailing roof tiles. I have not seen them often over the years so perhaps it is a local preference, but if you are doing much roof tiling then I would recommend that you get one; buy a decent make and go for one with some weight to it (say 250 to 300g).

This tool is designed for cutting clay and concrete plain tiles (the blades are adjustable) without having to resort to power tools. The tile is marked and passed through the blades as they are worked up and down, taking off about 10 to 12mm at a time. For the best results the tile should be scribed first.

Scribes are useful when hand cutting because they give you a better chance of making the cut in the first place and the results are normally much neater. Go for one with a good handle that you can grip so that you can apply the appropriate pressure when scribing.

As the name suggests, snips are used for cutting thin metal and in roofing that normally means sheet lead. The dressers are used to beat the lead into place and the chisels for chasing out masonry joints and positioning the lead into the joints.

Since truss rafters became popular, it has been standard practice to saw battens rather than to chop them with a lath hammer. You should choose a fine-tooth saw or a bow saw, some roofers carry both.

Along with a suitable heavy-duty bucket, I would recommend the use of a hand board for applying mortar and especially when pointing. 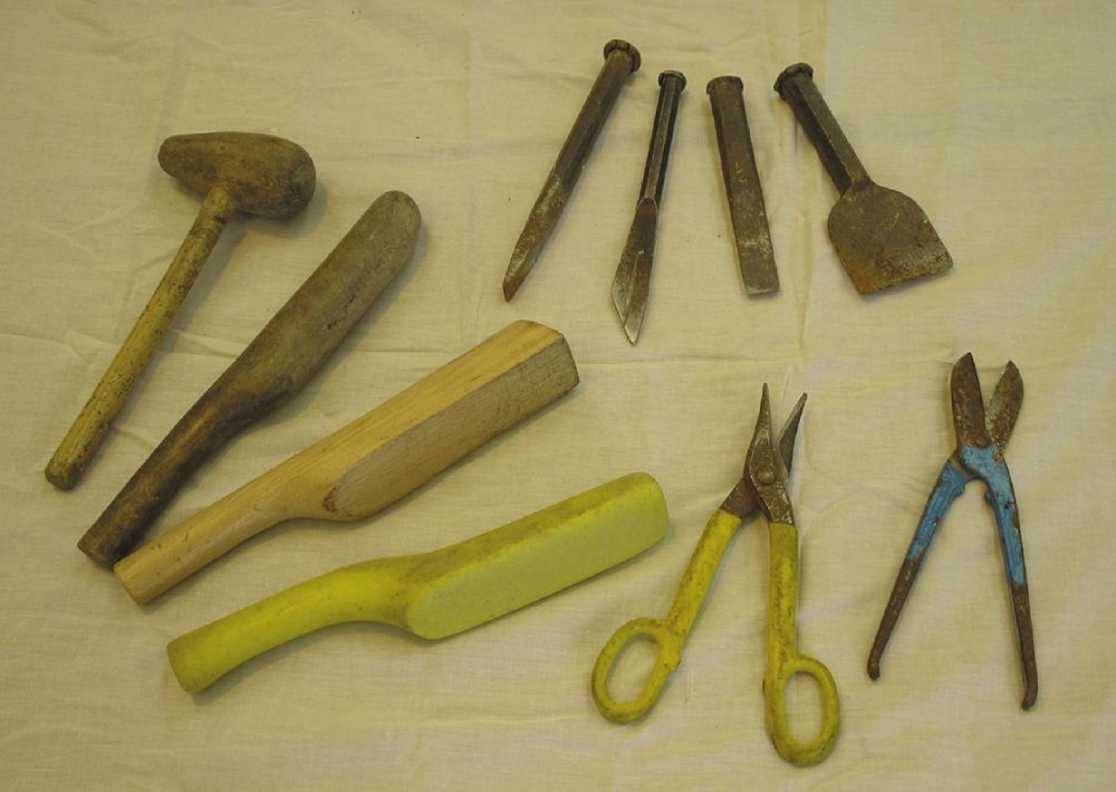 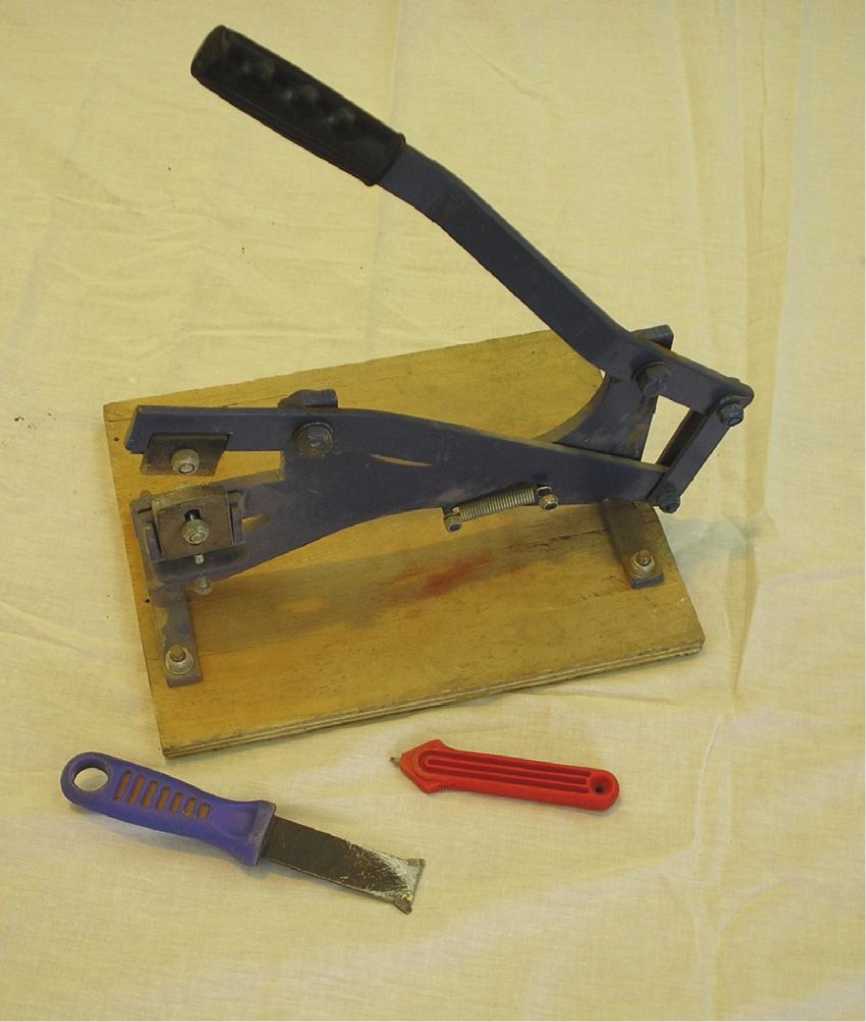 Since plastic underlays became popular, many roofers now prefer to use heavy-duty staple guns as an alternative to nailing.

Also known as a crowbar, wrecking bars are useful tools if your work involves stripping roofs. They give you a lot more leverage than a claw hammer and can be especially useful when removing old battens and timbers.

This is handy for taking notches out of fascia boards and similar such jobs where small sections of timber need to be removed to assist in the laying of slates, tiles and components.

For small amounts, it is common practice to mix mortar by hand, but, if you require more than a few bucketfuls, then you should consider using a mixer. Portable cement mixers are readily available from plant- and tool-hire shops. Portable mixers may be electric or petrol-driven (larger mixers are normally diesel-powered). Which one you choose depends largely on personal preference and obviously whether or not you have access to a power supply.

When you hire a disc cutter you will also need the correct type of blade, fuel and the necessary PPE (and water attachments for dust suppression). All of these should be available from a hire shop.

When buying or hiring a ladder it is important to check that it is in good condition and is of the correct length for the job. When erected, the ladder should be at an angle of around 75 degrees to the ground with at least five rungs above the step-off point. Always make sure that the ladder is lashed at the top so that it cannot move. Heavy-duty aluminium extension ladders are perhaps the most versatile, but on most sites you will find that wooden pole ladders are still preferred.Ladders

Roof ladders, also known as roof crawlers or ‘cat’ ladders in some parts, should be used for minor repairs only or inspections. Anything more extensive than this will require a working platform. As with normal ladders, check that the roof ladder is in good condition and is of the right length for the job. Most roof ladders are made of aluminium and come with wheels so that they can be rolled up the roof and then flipped over into position. Make sure that the hook is firmly located behind the ridge and that the bottom of the roof ladder is lashed to the access ladder.