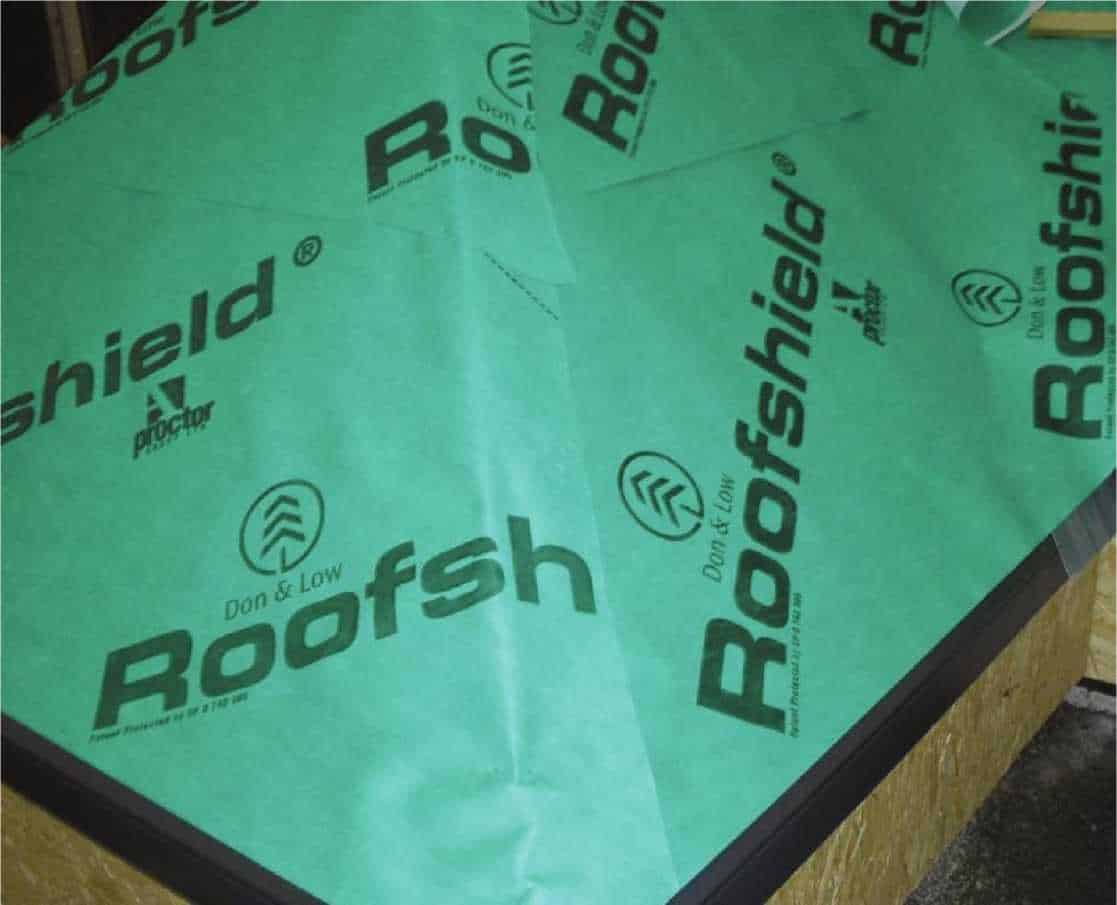 It is important to understand that modern underlays are proprietary products, so the fixing instructions should be checked with the manufacturer’s information. However, in general, all underlay should be laid with a slight sag (nominally 10mm) to allow any water trapped in the roof to drain away to the eaves. It is important not to over-tighten the underlay as this can lead to water tracking across the battens and into the roof via nail holes. Likewise, the underlay should not be laid baggy as this can lead to excess flapping in high winds, and the ballooning effect can even lift tiles off the roof in some cases.

As indicated previously, most slating and tiling underlays are not designed to be exposed to the elements and so it is important that felt-support trays (sidelap normally 150mm) are used to conduct water into the gutter, with the underlay set back out of harm’s way. Another popular method of treating the eaves is to use a membrane that has been designed for exposure, such as Type 5U (a flat roofing felt). When using 5U, it is not necessary to use a full 1m roll along the eaves. A strip of 330-­500mm is normally quite sufficient and this can be cut on site from a full roll (i.e. into half or into thirds) or pre-cut rolls can be found at many roofing merchants. The leading edge of the 5U should extend approximately halfway into the gutter. Again, the leading edge of the underlay can then be set back. Where possible, the first strip of underlay across the roof should be all in one piece (that is, not jointed). The eaves are an area where water can gather if there are defects in the roof (such as broken or missing tiles), so avoid nailing in the bottom 200mm or so. 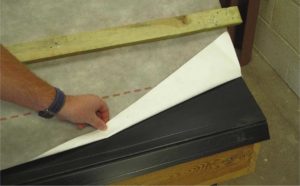 Felt-support trays at eaves with underlay set back. 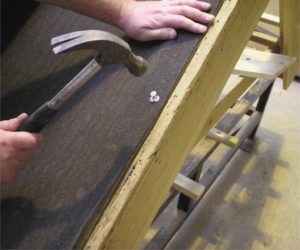 Cluster of nails near centre of the roll to create a pivot. 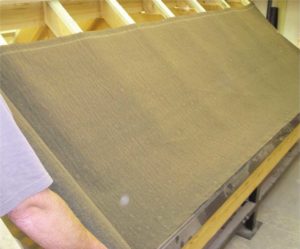 Underlay rolled out, straightened and fixed.

To help in getting the underlay straight and level when rolling out, fix a small cluster of nails about halfway down the edge of the roll to act as a pivot, rather than use a line of fixings. Roll the underlay out across several rafters before straightening it and adding additional fixings.

When one roll stops part-way across the roof there are several ways of forming a joint to carry on the process. The important point is that no underlay should be left hanging about unsupported and that there is sufficient lap at the sides. To form a watertight joint, start by trimming off or folding back the surplus underlay and then start the next roll one full rafter back.

The horizontal lap from one strip of underlay to the next depends on the pitch of the roof and on whether or not the roof is boarded, but the standard minimal headlap is normally 150mm. Most modern underlays actually come with the lap line already marked on, but, if this is not the case, it is a good idea to strike horizontal lines to maintain a consistent lap and to help in keeping the underlay straight. 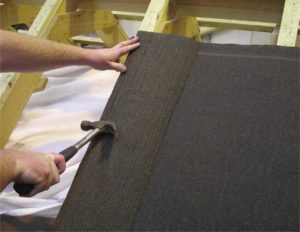 Fold or cut off the underlay back where it overhangs a rafter. 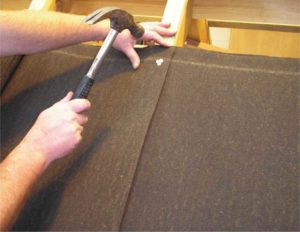 Start the next roll, one full rafter back to form a watertight joint.

Underlay to ridge, lapped over and set down for ventilated ridge.

Much depends on the specification and the type of underlay used in determining how it finishes at the ridge. Most ventilated ridge details require the underlay to be set down at about 30 to 50mm on each side from the ridge to leave a clear air gap, while in standard, non-ventilated ridge details the common practice is to position one side level with the ridge and carry the other over the top by the same minimal lap (for example, 150mm) as has been used for the rest of the roof. 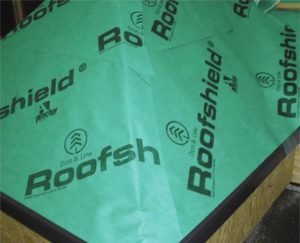 The hips can be finished in much the same way as the ridge, with a minimal 150mm lap, but this time being measured over the hip rafter rather than the ridge line. Alternatively, both sides of the underlay may be trimmed on to the hip rafter, fixed in place and then covered by a continuous strip (minimum 600mm wide).At the Hips

For GRP valley liners the most common method is to fix a continuous, 1m strip of underlay down the valley, to give an even 500mm on each side. To roll underlay down a valley can be difficult, as well as slightly hazardous, and so to make the task safer and simpler measure the length you need (measure the middle of the valley and add about 3m) and cut it on the floor or scaffold. Then fold and crease it down the centre; this makes positioning and fixing much easier, especially when you are working in twos.

Technically speaking, all underlay should be cut back from exposure, but doing this at the base of the valley may leave it vulnerable to leaks. Thus in this case it is better to allow the continuous strip of underlay to come right down to extend over the fascia board and be trimmed halfway into the gutter. The adjacent underlay is then cut or folded to the sides of the valley liner (once positioned) or, if 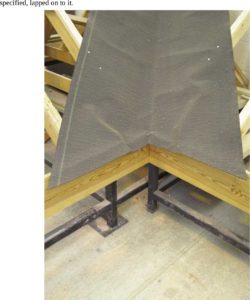 Underlay trimmed to side of GRP valley.

If the valley is lead-lined there should be no underlay at all beneath the lead. This is because the underlay could actually melt when the lead gets hot, thus trapping any water that gets in. The underlay should be lapped on to the sides of the lead as shown.

underlay to outside edge of tilt fillet (over lead welt/fold) 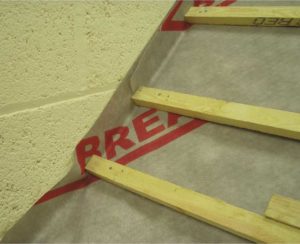 Underlay lapped on to (rather than under) lead valleys. Upstands against abutments (100mm).

At walls or chimneys, for instance, it is good practice to turn the underlay up because it adds to the water tightness of that particular detail. The underlay should be turned up high enough (normally 100-150mm depending on tile or slate type) to be extend under the flashing by no less than 50mm.