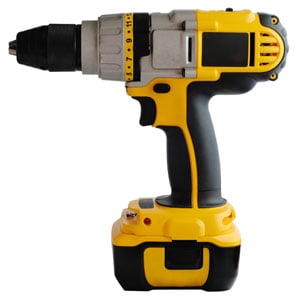 How to Drill a Screw into a Wall

How to avoid ‘cam-out’ frustration

In theory, driving screws is goof-proof. Just turn the screw and it goes in. But there’s one common frustration: The bit sometimes slips or “cams out,” gnawing away at the screw head. In an instant, you’re stuck with a partially driven screw, the head so wrecked that you can’t drive it in or back it out. All you can do is turn it out with a pair of pliers. Here’s how to avoid all that.

Pressure is the best prevention for cam-out. With enough pressure behind it, the driver bit simply can’t skip out of the screw head’s slot. So get behind the drill and push. That’s not possible when you’re reaching overhead or off to one side, so in many cases the best way to prevent cam-out is to get up on a stool or move your ladder to get closer to the screw.

Drill before you drive

In most cases, you can drive construction screws without drilling a hole. But if you’re having trouble, grab a drill bit that’s slightly smaller than the diameter of the screw. Drill a hole and you’ll find driving much easier. You’ll also avoid splitting the wood as the screw sinks in.

Get a bit holder

It’s possible to mount a bit directly into a drill’s chuck. But instead, spend a couple bucks on a magnetic bit holder. The magnet is a handy feature, but the long shaft of the holder is more important. It lets you see whether your drill is aligned straight and true with the screw —and that helps to avoid cam-out.

Phillips-head screws are a lot easier to drive than screws with a single slot in the head. But when it comes to avoiding cam-out, some are even better. “Square-drive” screws, for example, resist cam-out well. For the very best cam-out resistance, use Torx or similar screws. Avoid traditional wood screws; they simply don’t penetrate wood as easily as modern “construction” screws that have sharper tips. Some construction screws even have self-drilling tips for easier driving.

Drive screws at an angle

“Toe screwing” takes some practice, but it’s worth the effort. It allows you to make connections you otherwise couldn’t and to hide screws under boards where they won’t be seen (under a deck railing as shown here, for example). To make it easier, drill a pilot hole before driving. Or try it without a pilot hole, using the same two-step technique.

Bore straight into the surface with a drill bit that’s slightly smaller than the screw you’ll use.

2. Continue at an angle

When you’ve drilled about 1/8 in. into the wood, keep the bit spinning while you shift the drill to a sharp angle.